Gather round and let me tell you a tale, a tale of a dashing young prince and a rocky road to footballing redemption.

Our story begins in 2014 as Aitor Karanka looked to add the finishing touches to his Boro side. Under the Spaniard, the Teesside club had slowly gathered momentum, halting the slide that had seen Tony Mowbray’s reign end, winning 6 of their last 8 league games.

Despite a promising end to the season, Karanka still desired a proven goalscorer, a man he could depend and rely on as he plotted a promotion charge out of the Championship. That year, winger Albert Adomah had finished the season as top scorer by some way on 12 goals. That simply wouldn’t do.

Returning Academy product Danny Graham, MLS “banter” sensation Kei Kamara and young boys Curtis Main and Luke Williams had only managed 10 goals between them all season, with 6 of them coming from Danny Graham during a purple patch towards the end of the campaign. The Boro needed a hero to come along to take the crown of King Goalgetter, a crown that hadn’t truly been worn since the days of Mark Viduka, Yakubu and Woah Jimmy Jimmy.

And then he came. Slim, blonde and really, really quite handsome. Not quite a King but he was close enough. Prince Charming was here. 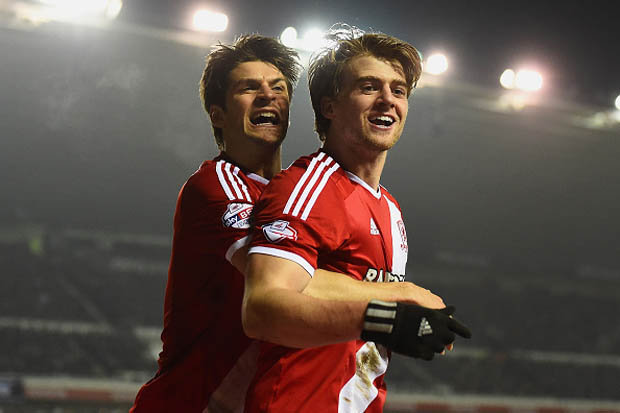 Patrick Bamford arrived on loan from Chelsea after netting 24 goals during spells at both Milton Keynes and Derby. While the first quarter of the season saw him playing back up to Kike and struggle to stake his claim for a first team place, after Paddy had stuck his second goal of the season past Rotherham, that was it. The goals never stopped coming.

There was a lot of them too. 19 in fact. There was some Boro fans watching Patrick Bamford who’d probably forgot what it was like to have someone that good at doing goals. They came in all different types as well. Tap ins, headers, cultured finishes from the edge of the box.

We hadn’t seen anything like it, as the graceful, swan-like pretty boy dovetailed with Jelle Vossen, Albert Adomah and Lee Tomlin to form the most potent and eye catching forward quartet in the league.

Everyone has a favourite Bamford goal from that season. The rasping top corner strike that finished off the Borocelona move against Millwall, the flick and volley against Wolves or the sliding block that sent an entire away end into meltdown as we tore Man City a new arsehole in their own backyard. Yet, there is one that stood above the rest as our hero cut down every single monster that threatened his castle and the Boro’s promotion charge, one that epitomised everything Patrick Bamford was that season.

Leading 3-1 against perennial bogey team Ipswich Town, Bamford was up top alone against two defenders as the ball was punted forward. Just inside the Ipswich half and with two burly centre halves to contend with, the ball was played in hope more than anything. Rather than bringing it down and looking to hold off the Ipswich defenders before his mates could join the fray, Patrick Bamford did a proper Patrick Bamford thing.

Anticipating the flight of the ball, he span the first defender and broke away, splitting the defence in two. They might as well have not been there as Bamford glided towards the area before firing it into the bottom corner. A thing of sheer beauty. It had everything; intelligence, a dash of pace you wouldn’t expect and swan-like grace in the precision of the finish. It was practically Paddy, in every single way. 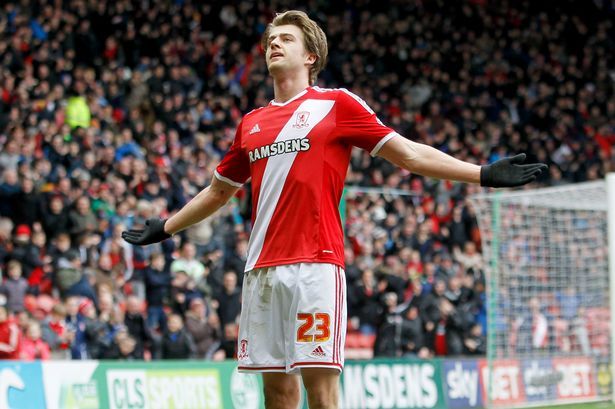 Though that season ended in heartbreak for our hero and his band of brave footballing soldiers, with Bamford playing through the play-off final defeat almost on one leg, the future was bright. That team, with Bamford at the spearhead, had made Middlesbrough fall in love with it’s football team again.

Men wanted to be him and women wanted to be with him. To be honest, most men would’ve given their left bollock for a night with Paddy. Love was in the air, everywhere you looked around.

Then, like most romantic tales, just when all seemed right with the world; disaster struck. Paddy wouldn’t be coming back to finally take us the Premier League. We weren’t his sleeping beauty anymore. It wasn’t meant to be.

Our smiley, sweet baby boy was taking the direct route to the Premier League and joining Crystal Palace on loan. Who could blame him? He was destined for a place at court in Chelsea, with all of his posh mates. He couldn’t achieve that in the Championship. Our fairy tale romance was over, simply a chapter in the Book of Bamford. Paddy was going straight to the top.

However, the road to success isn’t straight, there’s a curve along the way called failure. Our boy spent the next 18 months of his career on a constant curve of failure. From Palace to Norwich to Burnley, Bamford searched for a way back onto the golden path he’d mapped out for himself at Boro. Lost and unable to oust players like Frazier Campbell and Ashley Barnes from sides, he made just 22 appearances in a season and a half, mostly as a substitute and couldn’t remember how to put the ball in the net. 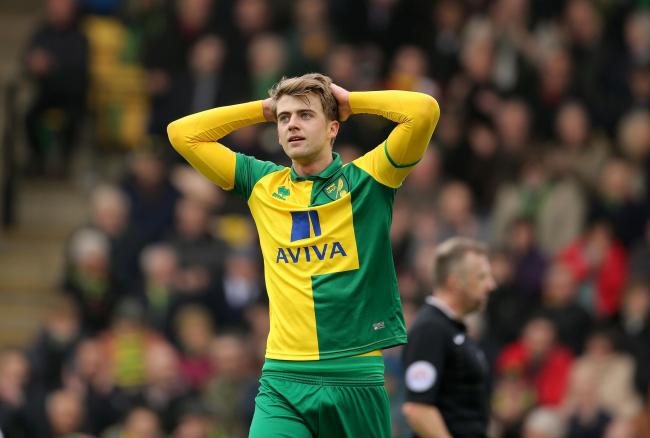 Our hero had gone from the prince to the court jester. A figure of fun for those targeting Chelsea’s player hoarding operations. There seemed to be no way back. Confidence shattered, our hero was now the damsel in distress, the hero needed saving.

With Boro treading water above the relegation zone in the Premier League and lacking a cutting edge, Aitor Karanka turned to the only man he could ever count on to score loads of goals. Paddy had asked Aitor to save him and Aitor came running. The prince had been returned to his rightful realm and Teesside rejoiced. The fairy tale was back on and Bamford was going to write the happy ending with his left foot.

The truth is that no matter how much we try, how much we want it, some stories don’t have a happy ending. Paddy was rarely used, Aitor Karanka parted ways with the club and Boro were relegated without as much as a whimper; a 3-0 defeat to Bamford’s former club Chelsea sealing the reds Premier League fate.

The season’s penultimate match against Southampton might be best remembered for the odd, piss take atmosphere as Boro fans vented their frustrations of a wasted season by chanting for Brad Guzan to be sent off for giving away a penalty and chanting Karanka’s name, but it was here that Patrick Bamford finally stepped off the path of failure and onto the road to redemption.

Heading a late corner into the Southampton net for a consolation goal meant nothing but it also meant everything. That goal was his first in two full years. The boy ran off bursting with pride, jumping and fist pumping as if he’d kept us up. Maybe he would come good again. 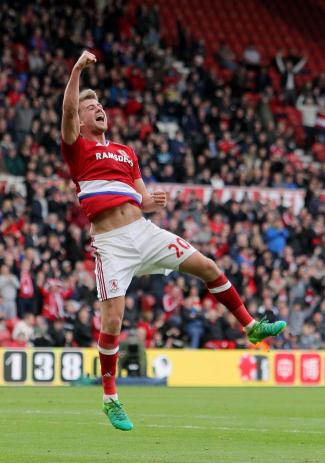 As Garry Monk took the helm at MFC, Bamford sensed his opportunity to finally reclaim his crown. Back into pre-season training weeks before his teammates, the blonde bombshell was ready to tear the Championship apart all over again. He started brightly under Monk, as part of forward three with Rudy Gestede and Britt Assombalonga, as the Boro awkwardly ambled through the first handful of games. Then, again, the ugly monster of disaster reared it’s head and swept the carpet from under Paddy’s feet.

Injury to Rudy Gestede saw Monk sack off his three up top format and go for the “tried and tested” lone striker. Despite netting two in the cup at Villa, Bamford would go on an 11 game stretch of mainly sub appearances at the end of games as MonkBot would revert to panic settings and chuck strikers on without any rhyme or reason. There seemed to be no way back for Prince Charming. Even ASHLEY FUCKING FLETCHER was given the nod over him at times. Nobody has ever written a fairy tale that grim.

As Monkbot was sent to the scrapheap, things seemed over for Bamford. Returning to an ex never really works out and that looked to be the case as Tony Pulis came in and almost immediately stuck his colours to the big, long mast of Rudy Gestede. Gestede wasn’t pretty or elegant but he was a battering ram that could be used to break down defences and Pulis liked battering rams, not pretty little princes.

Fortune favours the brave, though. Rather than seeking a move away from Boro, Bamford stayed, determined to rekindle the passion of his first love with MFC. Finding himself rotating wings with Adama Traore, either side of Battering Ram Rudy, Bamford had finally found a starting place to call his own for the first time in nearly 30 months.

Against struggling Hull, Paddy flicked a Shotton cross onto Rudy’s head to make it 1-0. He wasn’t done there. Picking up a wayward Hull pass, Bamford strode forward as if it was 2015 all over again, with grace and an icy coolness. Dinking the ball over the oncoming keeper and into the net, the Riverside shone a collective smile. There he was, stood in all his glory, boyish good looks and confidence beaming off him. Finally.

That game against Hull would see what may be the defining moment in our hero’s story and it wasn’t the goal. As the seconds ticked down, Rudy Gestede launched into a tackle and fractured his ankle, ruling him out for the rest of the campaign. After years of bad luck and setbacks, Bamford had a chance. With Assombalonga unfavoured by Tony P and his shiny white sneakers, there was a glimmer of hope.

Pulisball with our svelte, soft pretty Patrick? Surely not, you cry?

This is a fairy tale after all. Magic has to happen. Thrust into his favoured centre forward role, just like that first season at the club, once the goals started coming they haven’t stopped. As well as Hull, the Mackems, Leeds and Birmingham have all felt the force of a revived Patrick Bamford, as 7 goals have flown in over 4 games.

Forming an electrifying connection with Adama Traore, the long lost prince who spent years scratching and clawing his way back to his throne, has begun to glide freely down the road to redemption.

There may be more bumps to come in the road for our hero, we can’t be sure where his path is headed under Tony Pulis, but one thing can be guaranteed; our sweetheart is home and at the end of the day, love conquers all.