Back in the summer of ’69. The summer of love. Summer lovin’ had me a blast. Italia 90 and Euro 96. No matter what happens for England in their World Cup semi-final tonight against Croatia, the summer of 2018 will be immortalised in songs, video montages and memes for years to come.

In thirty years time, the trendy fellas of that generation will be kicking about in this tournament’s training top while boogying to Dua Lipa at retro nights. Our kids will be sick of hearing “they don’t make centre backs like Harry Maguire anymore, proper defender him” and will look on in horror as you break out one of Jesse Lingard’s dances at the family barbecue.

We’ll still bare the battle scars of the legendary heatwave; the tattoo of John Stones face or the scar from falling down the stairs after day drinking for the Sweden game. University dissertations will be written about how Gareth Southgate and 23 footballers finally united a nation at the very moment the political climate in the country had threatened to rip it apart.

They talk about football coming home. It already has.

For too long, international football has represented an unnecessary distraction for me from the “important” stuff. Club football. Not for everyone, I know a few lads who follow England as religiously as they do Boro. Fair play to them. However, as a 23 year old that has never been immensely patriotic, England have always been a distant second. They’ve never truly felt like *my* team.

For years, they were hidden away in the capital, unable to really speak to the media and managed by bland, old men. They’ve felt more like an NBA style Premier League AllStars team than the England national team. They’ve often played like it, too.

The Golden Generation that included genuinely world class players like Beckham, Gerrard, Lampard, Scholes, Owen and Rooney never got the job done and rarely looked like they enjoyed playing together. Most of them didn’t even look like they enjoyed playing for England, as if like me, they found it an unnecessary distraction from club football. Just something that had to be done.

Holed up in Wembley, the team were never able to express themselves to the public. The only time England players said anything to the press, it was to deny sleeping with a teammate’s wife or making racist remarks to an opposition player. They became unrelatable, a pack of personality-less millionaires, with their flashy motors and pin-up wives rather than a pack of lions representing their country.

How could a young working class lad from Middlesbrough ever get behind a group of London party boys, with their only spokesperson being an ageing barn owl in Roy Hodgson or a wrinkly uncool Italian Postman Pat wannabe in Fabio Capello?

They say managing the England team is the hardest job in world football, yet Gareth Southgate has made it look effortless this summer. As sales of waistcoats (only the English, right) and Atomic Kitten CD’s have soared due to his exploits, the former Boro and Aston Villa man has remained calm and collected. He was never meant to be like this, he was supposed to be the ultimate FA yes man.

Brought through the ranks as the head of elite development before nurturing the Under 21 side, Gareth Southgate was seen as the man that embodied the FA coaching handbook, the safe option. Southgate wasn’t meant to rock the boat. He hasn’t just rocked the boat, he’s built a new one and took us on a high seas voyage.

Southgate has set about creating an actual international football team, one fit for purpose. Despite being the “safe option”, he’s been the man to finally close the door on England’s Golden Generation by dropping Wayne Rooney and Joe Hart. He’s picked a system that’s being used throughout the national set up and has picked the best players for it. 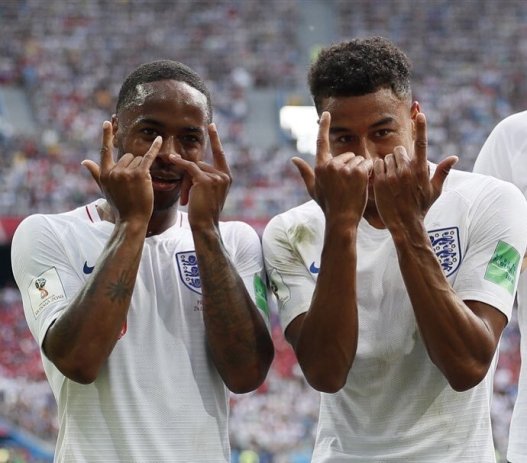 No squeezing the greatest passer of a generation in Paul Scholes on the left wing to accommodate Gerrard and Lampard or taking a big man like Andy Carroll as a Plan B because “that’s the England way”. He’s allowed the players to express themselves on the pitch, encouraging a riskier style of playing out from the back and one touch passing in the final third, making for a more exciting side.

It isn’t just on the pitch where Southgate has allowed the team to express themselves either. Before they flew out for Russia, he helped to organise an open media day at St. George’s Park where the mainstream and online press had full access to every single one of the players. It was here that Danny Rose opened up about his struggle with depression, something that further signified the changing of the guard. Could you imagine Ashley Cole being so candid about his personal life, let alone being allowed to?

During the tournament, the England team have also been allowed to take part in a regular live show on the England YouTube channel, Lions Den. Hosted by Craig Mitch, the show sees the lads answer questions from fans, chat about the previous game, the one coming up and have a bit of crack. It’s not groundbreaking but it’s something that’s further helped to bridge the gap between the squad and fans.

The biggest help in all of this though, is the squad itself. Not a twat amongst them, is there? There’s no controversy hanging over them as in tournaments past, no bitter club rivalries pulling them apart. This is a team that quite simply enjoys playing football for their country, going on Fortnite together and having a daft dance or two.

There’s not a single player that sums up my shift in attitude to the England team than Jordan Pickford. While he’s now at Everton, Pickford used to play for Sunderland and is 100% Mackem. We hate Mackems and they hate us, that’s how it’s always been and that’s how it always will be. Not Jordan though.

Short back and stompin’, Jordan Pickford is one of the boys. He listens to MC Tazo and can save pennas. What a man. There’s people in Essex finding out what New Monkey is because of Jordan Pickford and he’s got a left hand stronger than the Infinity Gauntlet. 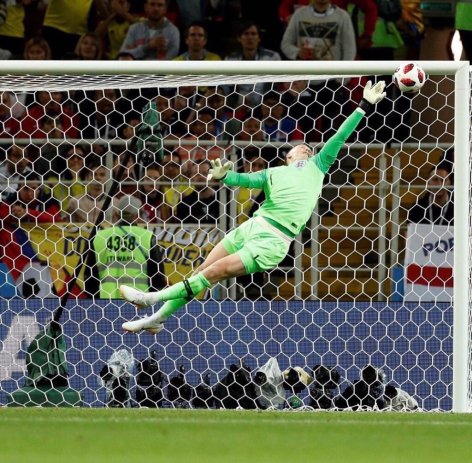 Then there’s the defence, built on the streets of Yorkshire but knocking it about like they were born in Spain Proper liquid football. Harry Maguire on the left charging out of the back line like a young Paulo Maldini with his big slab head wobbling all over the gaff, Kyle Walker on the right laughing and joking as he releases Kieran Trippier on another bomb down the line and the Barnsley Beckenbauer John Stones pulling it all together in the centre.

They’re not too bad at the other end either, with Stones and Maguire chipping in as England have scored five goals from corners during the World Cup. It’s a bit like watching Boro. Maybe that’s why I like them.

England haven’t just scored from corners, by the way. For the first time since 1986, an England player might come away from a World Cup a top scorer. In the 4 games he’s been involved in, Harry Kane has scored 6 goals. The man might sound like he’s chewing on a Flump when he speaks but he’s really, really good at doing goals. Captain at 24 years old, Kane epitomises what this England team is all about: hard work and dedication.

The Spurs striker isn’t a superstar that was thrust into the limelight at a young age, signed by a major club for tonnes of Arab oil soaked cash and groomed to become the face of the team. Kane wasn’t even meant to be the main man for Spurs, never mind England captain. He had to graft out on loan and on the training pitch to finally be given his chance and since then, he’s never looked back.

Success hasn’t changed him either. Forced to drop deeper than he would for Spurs during this tournament to help the rest of the attack work, he hasn’t sulked and cut a forlorn figure. Harry’s stuck to his job and lead by example. A proper captain. A proper world-class centre forward.

Kane has been ably aided by Jesse Lingard in behind him. Lingard has danced his way into the heart of the nation as the poster boy for pissboiling and reminding us all of how fun football is.

One of the biggest personalities in the camp and a major leader in uniting the dressing room, when JLingz has a ball at his feet it’s like he’s transported back to being a kid playing in a park in Warrington. Smile on his face and not a care in the world, he’s floated around the World Cup stage and Snapchatted the entire journey. 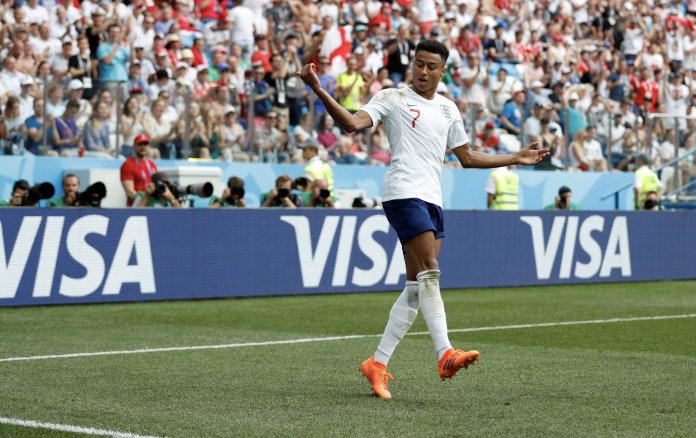 The entire tournament itself has been a real journey for this squad as well, almost a narrative out of comic book. There’s been trials and tribulations, redemption and the chance for a poetic ending. Before the tournament, Raheem Sterling was subjected to an attack from the mainstream media that made you wonder whether a UKIP membership automatically gets you a role within a red top office.

As the country gave a collective middle finger to the press on his behalf, Sterling has quietly went about his business, dovetailing with Dele Alli.

While Alli and Sterling have struggled for goals, their movement has helped to pull teams about and ensure we haven’t had to sit through 90 minutes of passies as England meander to bore draws or narrow wins. It’s the sort of stuff your Dad doesn’t value because football is about goals, mate (to be fair, it is, goals are the best), but it’s essential to Southgate’s system.

The greatest redemption of all came in the round of 16 against Colombia. As extra-time petered out, a familiar shiver went down the spine of every person in the country. Everyone seemed to know the score, we’d seen it all before.

It was England in a World Cup penalty shoot out. The dream was over. When Henderson missed, the retro shirts and bunting were being bagged up and put away for the next tournament. Pickford’s save meant the World In Motion vinyl was put back on the record player.

Then history was made.

As Eric Dier, often a figure of frustration and the token scapegoat of the side, struck the ball beyond David Ospina’s right hand the ghosts of Italia 90, France 1998 and Germany 2006 were finally expelled. The calm and collected Gareth Southgate fell to his knees with a scream of unbridled joy and John Stones turned to scream a massive “fucking have that you cunts” to a team of cheating Colombians.

22 years after his penalty hell at Euro 96, Gareth Southgate will finally be able to hear the word shootout and smile. Except if it’s on the news and someone has been killed. That’d be weird.

After sending the country into meltdown by beating Sweden, Southgate and the boys now face Croatia, one win away from being the first England team since 1966 to make a World Cup final and have another chance to banish ghosts of the past.

One of the darkest days England have faced on a football pitch was against Croatia in 2007, as Scott Carson threw his career and a Niko Kranjcar shot into the net and England missed out on qualifying for Euro 2008. Steve McClaren, the wally with a brolly, became a pariah and went off to Holland to do mad accents. If they can get past Croatia this time, it’ll leave a chance at glory against an old enemy. Football truly is something special.

This is an England team that has already brought football home.