Emilio Nsue has achieved a lot more in his career than you’d first imagine. A double European champion with Spain at Under-19 and Under-21 level while playing alongside the likes of Thiago Alcântara and Juan Mata, Nsue is now captain and all-time top goalscorer for Equatorial Guinea.

He has been part of a title winning side at APOEL Nicosia in Cyprus, secured promotion in Spain with Real Sociedad and helped to keep Birmingham City in the Championship. However, there isn’t any doubt of where in the world the now 31 year old is most appreciated. It’s Middlesbrough.

Arriving as part of Aitor Karanka’s Spanish Revolution in the summer of 2014 with Tomás Mejías, Kike and Damia Abella, nobody was really sure what Emilio Nsue was meant to be. After a handful of brief cameos at the start of the season, a thrilling performance on the right wing as Boro swept aside Brentford (how times have changed) 4 nil at the Riverside looked to have ushered in a new dawn for the side.

Having already whipped a cross in from the right to set up Albert Adomah for Boro’s second of the day, Nsue picked up Grant Leadbitter’s short corner on the left. Nobody likes a short corner. There was a collective murmuring of discontent as Nsue shaped to send it into the box.

Everyone knew where this was going. It wasn’t even beating the first man because short corners never work. Except this time it worked. Nsue lofted it in for Patrick Bamford to nod home. Not only had Nsue performed a genuine miracle by making a short corner work it seemed that Aitor Karanka had cracked Boro’s version of the Da Vinci code. We had a pacey winger on either flank. Imagine. 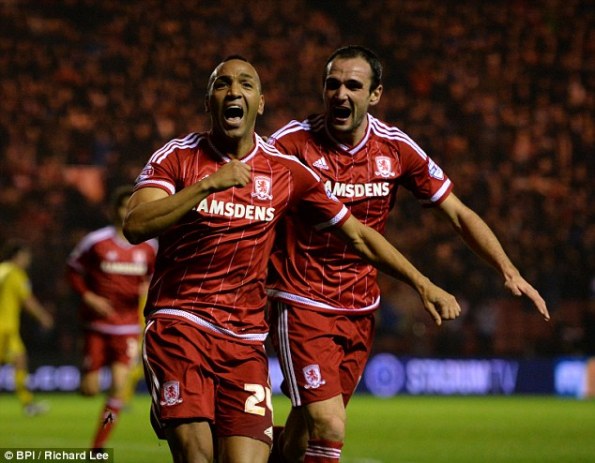 Then Nsue was playing right back the next game and things went back to normal. You can’t have two wingers on Teesside at once, lads. It’s just not allowed. That’s how the rest of the season went for the former Malloca man, in and out of the team, deputising for Ryan Fredericks at right back or filling in for Albert Adomah out wide.

Of the 29 games Nsue featured in that season, 14 were at right back and 14 were at right midfield. The Guinean was the utility man of the squad, filling gaps whenever necessary. His chances to nail down a spot in the starting eleven were not helped by the form of Fredericks and Adomah or international duty. After playing six games on the spin at right back, in a run that included victories over Millwall, Forest and Derby, Nsue had to leave mid-season to captain his country at the African Cup of Nations.

In only their second ever appearance at the tournament Equatorial Guinea, as hosts, managed to reach the semi-finals with Nsue spearheading the attack. Despite claiming hero status in the oil-rich African republic, success at the tournament came at a cost.

By the time he arrived back in Middlesbrough, Nsue hadn’t played for the first team in nearly two months and would only feature sporadically from the bench. Even after Ryan Frederick’s season ending injury and the restrictions on Tomas Kalas’s short-term loan had ruled him out of the play-offs, it was Dean Whitehead who was preferred at right back rather than Nsue. The man had pocketed Jesus Navas in the FA Cup, to be fair.

Heartbreak at Wembley was followed by a flood of incomings as Karanka put the finishing touches to a squad that could bypass the lottery of the play-offs entirely. Stewart Downing’s homecoming, the arrival of Uruguyan pair Cristhian Stuani and Carlos De Pena and the re-signing of Tomas Kalas looked to relegate Nsue to second choice fullback and an in case of emergency only wide option.

He could quite have easily taken a cushy number back in Spain’s Segunda Division and chased his real calling as an Instagram phenomenon – more on that later. Yet, he chose to stay and fight for his place.

Fortune clearly favours the brave as Nsue made the most of untimely injuries and suspensions to other members of the Boro squad and made 40 appearances in the league, nearly all at right back, as Boro mounted a promotion challenge that would end on that unforgettable day against Brighton. Emilio Nsue had finally found his place in the starting eleven and he’d definitely found his home in the hearts of the Red Army.

The defensive unit of Dimi, Nsue, Daniel Ayala, Ben Gibson and George Friend will be immortalised in the record books for being almost immovable during that season. Conceding became an anomaly and if you managed to penetrate the defence once, you wouldn’t get away with it again that game.

The watertight defence became synonymous with the Karanka era and being a part of that is what Nsue will be best remembered for that season but his three goals that year were just as important to the promotion hopes. 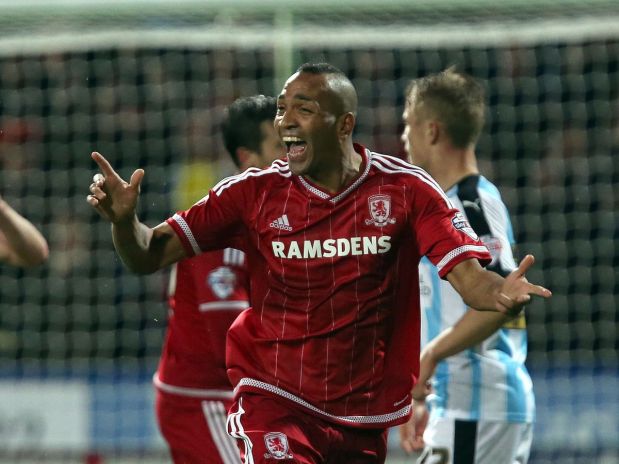 His first, against Huddersfield, sealed all three points in a match that Boro hardly deserved to draw. The goal, coming at the end of a quick passage of play and an Adam Forshaw back heel, was only the third shot we’d had that game. They’d link up again in December as Nsue scored the winner against promotion rivals Burnley in a man of the match performance for the fullback.

Forshaw’s finest moment in a Boro shirt, the scrambled last minute winner against Reading, was preceded by Nsue knocking in the opener earlier in the game. A season that was on a knife-edge until Dimi took the ball out of the sky in the closing moments of the final day could’ve been over without Nsue’s goals.

It wasn’t just on the pitch where Emilio was making his mark. His Instagram stories and photos gave Middlesbrough fans a behind the scenes insight into the team spirit and camaraderie that truly made Aitor’s Handsome Reds feel special. Whether it was photos of all the lads at Rockliffe or clips of the Spanish contingent singing in Tomás Mejías’s car it went down a treat. The bond forged between club and supporters during that period, only made stronger following the despair at Wembley, is what pushed them over the line against Brighton.

Nsue’s commitment and tenacity on the pitch and his fun-loving nature off it resonated with Boro fans. Work hard, play hard baby. He would be christened The Guinean Cafu, leading to many lazy attempts to recapture that magic in later years and his terrace acclaim was taken one step further with the rousing renditions of Chaka Khan’s “Ain’t Nobody” that remains one of the best player chants of recent times. Simple, effective, spot on.

We’ll even forgive you for that rainbow flick because we know Grant won’t. At least that went viral for you. All about the clicks and views innit, mate.

Premier League football called time on Nsue’s Boro spell as Antonio Barragan arrived on Teesside ready to foul throw the team right back into the Championship. As many former Boro players seem to do, Nsue joined Birmingham City before heading on a Cypriot adventure with both APOEL Nicosia and Appolon Limassol. It’s been pretty easy to keep track of him on social media.

It’s Nsue’s birthday today. I hope you’re enjoying it mate and you’re sat in the sun with a few bottles of Keo. I’m sure we’ll see a decent Insta post tonight. Once you’re done sunning it up, you’re always welcome back in Middlesbrough because you made everybody happy. You made us feel a certain way. You loved it here and we loved you because their ain’t nobody like Nsue.