It has been five years since Middlesbrough F.C. secured their long-awaited return to the Premier League with a 1-1 draw against promotion rivals Brighton on an afternoon where the very Spirit of Teesside reverberated round the Riverside, a Riverside that stood defiant against the possibility of the Seagulls swooping in and spoiling the party.

It would have been the most typical Boro moment of all time, to lose what was essentially a play-off final in our own backyard after a rollercoaster season that had seen last minute winners, dodgy offside calls and managerial meltdowns.

Yet, the result was never in doubt from the second the two teams walked out to be met by a sea of red and a wall of noise. Brighton didn’t know what had hit them and, Dale Stephens’ equaliser aside, didn’t look like they were capable of shaking off the effects of the Red Army bombardments that were fired from all four sides of the stadium. 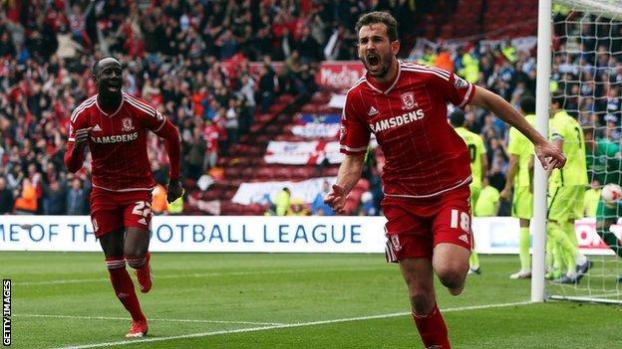 It’s flattering and funny in equal measure that they hastily tried to throw together a tribute act for their play-off semi-final home game against Sheffield Wednesday 11 days later, with banners, drums and a pre-match flag display. You can’t bottle what we had that day, unfortunately.

That afternoon is my most treasured Boro memory and with the way things are at the moment, might be for the foreseeable future. Of course, winning the Carling Cup and the European adventures are more grandiose and unparalleled in terms of success but they’re moments that are wrapped in youthful nostalgia and naivety. I thought things would always be like that.

I wasn’t old enough to have experienced the tough times that make fleeting successes all that sweeter. I didn’t experience the UEFA Cup run surrounded by 30 of my best mates and I wasn’t travelling the country every week following the team in 2004.

The comebacks against Basel and Steaua, punctuated with Ali Brownlee’s immortalised commentary, leave me glassy-eyed and covered goosebumps every time, but when I sit back and close my eyes to think about those nights, they’re simply snapshots in my mind.

On the other hand, that glorious draw against Brighton is a complete, vivid technicolour masterpiece.

Some of that is because of time and age. I hadn’t even finished primary school when Gareth Southgate led the side out against Sevilla in Eindhoven, while I’d left Uni and had settled into a career by the time Grant Leadbitter hoisted the illustrious Championship second place “trophy” above his head five years ago.

However, 2016 being fresher in my mind isn’t the only reason getting promoted meant and still does mean so much to me.

When Dimi plucked the ball out of the sky in the dying seconds of the game and Boro fans streamed onto the pitch, I didn’t join them. Not out of a snobby attitude to pitch invasions but because promotion meant more than a return to the Premier League.

Instead, I grabbed whichever of my friends was nearest to me and pulled them close before making my way round each and every one of them. My voice, battered and broken from 90 minutes of chanting and screaming for the ref to blow his whistle could only muster chokes of “fucking get in”.

Every embrace that went round in those ensuing minutes equalled the exorcism of a bad memory. Seven years of being stuck in the mire of the Championship after only ever knowing the glitz and glamour of the Premier League. Seeing the likes of Tuncay, Stewart Downing and Robert Huth making way for Lee Miller, Mark Yeates and Sean St. Ledger.

Trying to survive in the SPL wasteland that remained in the wake of Gordon Strachan’s razing of the Riverside. Looking across the stadium on a Saturday and seeing more empty red seats than fans. 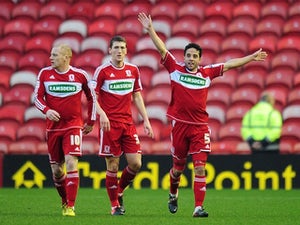 Having to hitch hopes of seeing flashes of entertaining football on the boots of Emmanuel Ledesma or Merouane Zemmama. Having to not get too excited about an early season march up the table because winter is coming and the inevitable New Year slide is just around the corner. Being bounced out of cups by Burton Albion and Accrington Stanley.

Watching the dream of club legend Tony Mowbray flying us to the moon and back to the big time slowly crash and burn without the necessary financial fuel before fists flew among the wreckage against Barnsley.

Being tortured by Luciano bastard Becchio, Connor Sammon and Gary Taylor-Fletcher. Seeing Blackpool, Bournemouth, Burnley, Leicester and Southampton reach “the promised land” ahead of us.

Being front row to see our promotion hopes implode in a Dwight Tiendalli disasterclass at Vicarage Road before hearing forty thousand Boro hearts break in unison when Cameron Jerome opened the scoring in the play-off final.

Feeling totally helpless at full time as men like Grant Leadbitter and Ben Gibson, who’d worked so hard to help the fans feel proud of their team again that season, began to break down and cry as many of us did that day at Wembley.

All of that, every shitty midweek defeat, every “worst signing ever”, every single moment of frustration and anger that had ruined countless weeks was washed away at the end of that game against Brighton. We had overcome. Those same faces that had been streaked with tears at Wembley were looking back at me now, overcome with euphoria.

We surfed that wave of redemption all night long. The party that followed wasn’t just fuelled by booze, it was a cocktail of relief and sheer ecstasy and the whole of Teesside indulged. It was more than the rush of victory, in that moment it was like nothing else mattered and nothing could go wrong again. We were untouchable.

If there had been a way of bottling up that feeling and finding a way to engineer it for mass production, there’s no doubt in my mind that I’d be typing this from my superyacht using money to wipe my brow, proper Pablo Escobar style.

It’s that feeling, those moments where you’re suspended in time with thousands of other people from all walks of life united under one banner basking in the glory of one single accomplishment that makes football so precious. It’s what made the attempted Super League coup so disgusting.

It’s why football clubs have to be safeguarded in the same way works of art and historical landmarks are. It’s why, no matter how bad things get or how much we disagree with transfer strategies or playing styles, we’ll be following our clubs until the day we die. The pursuit of happiness will never die because for every bad day and crushing loss, your football club give you some of the best days of your life as well.

That’s exactly what that Boro team gave me when Cristhian Stuani got a foot on David Nugent’s header across goal and when they refused to let Brighton pull promotion from our grasp. That’s why that entire squad, from the heroic Captain Grant all the way down to Julien De Sart, hold a special place in my heart.

The betrayals of Gastón Ramírez and Daniel Ayala cut that little bit deeper because of how instrumental they had been during that campaign. Aitor Karanka, for all of his arrogant pitfalls and struggles since leaving Boro, will always be THE MAN in my eyes for directing the team and reigniting a childlike naivety in me. Maybe the good times were back, and like those days of McClaren, things were always going to be this good.

Evidently that wasn’t to be, but the dissection of that ill-fated Premier League season and the attempts to get back there are for another day. Today, I’m going to sit down and watch that game back.

I’m going to chuck in a fist pump for Stuani’s goal. I’m going to call Dale Stephens a dirty bastard for taking a chunk out of Gastón’s leg. I’m going to nervously pace around watching the minutes tick away despite knowing exactly what happens. I’m going to crash back into my seat as Dimi catches that ball, take a deep breath and try not to cry again.

I’m going to relive one of the best days of my life. Hopefully the next one isn’t too far away.