With the Euros cranking into top gear in the knockout rounds, the novelty of being able to do *things* again and even the Pimms-infused distraction of Wimbledon kicking off (did you catch Vintage Murray on Centre Court on Wednesday night?!), Boro’s transfer window had kind of slipped my mind.

That was until this week when Neil Warnock and the chaps down at Rockliffe decided to make the most of the space vacated by Scotland by securing three new signings to join Joe Lumley in the annual Boro Rebuild.

The first was a familiar face to Boro fans as former loanee Sammy Ameobi arrived on a free transfer after seeing out his contract at Nottingham Forest. Shola’s little brother was a bright eyed, bushy tailed 20 year old during his first stint on Teesside in 2013.

2013 was a weird time to be a Boro fan. When Ameobi made his debut against Cardiff that March, Tony Mowbray’s side had only won once since the start of the year and an outing against the league leaders didn’t promise much especially given that the Bluebirds were on a 9 match unbeaten away run.

This was, after all, a Middlesbrough team with Ishmael Miller upfront, Nicky Bailey at right-back and Ameobi and Kieron Dyer on the wings.

What nobody saw coming was an opening 20 minute Boro blitz led by Ameobi, Dyer and Miller. No, honestly. Big Ish had squared for Dyer to score his first goal since 2007 before Ameobi snake-hipped and sidestepped past two defenders to curl in a debut goal.

A constant menace to Andrew Taylor and Ben Turner, Ameobi repeatedly danced past Cardiff players almost in tune to the Conga tune that came from the stands. It’s not hyperbole that few players have made such an impression on their Boro debut since.

He then set up McDonald against Huddersfield in the next game. Well apparently he did, the fog at the John Smith’s Stadium meant the entirety of the Huddersfield goal was concealed from view but one thing was clear. Sammy Ameobi looked like an absolute bloody baller.

However, the performances and production quickly tailed off. It was like the Ameobi who’d played against Cardiff had been lost in the Huddersfield fog. He returned to the Trophy Virgins after playing 9 games.

We’ve both come a long way since then. Boro have been up, they’ve been down and they’ve sort of just been stuck in place. The same can be said for Ameobi, who played 35 times in the Premier League for the Geordies in the two seasons that followed his time here before another loan move to Cardiff.

He then signed for Bolton in League One and helped them to promotion, playing two seasons in the Championship for Wanderers until moving to Forest.

Now 29, Ameobi returns to the Riverside Stadium on a two year contract with an option for a third year. 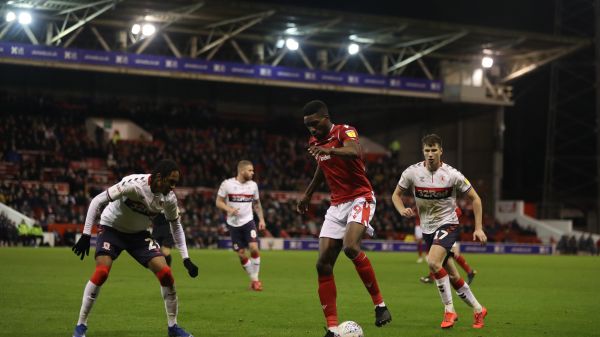 Comfortable on either wing or in the “inside forward” role that Warnock sometimes favours, the trickster must deliver more than the 3 goals and 2 assists he managed at the City Ground last year and add consistency to his repertoire of skills.

While he brings Championship experience and knowhow (he’s closing in on 200 games at this level), that also means Boro fans are acutely aware of his ability to both entertain and enrage.

While he was one of Forest’s better players last season, he was firmly lodged in Marc Bola’s pocket during our scab-bashing victory in January, at a time when Ameobi was considered one of the form players in the league.

He’s not an alarmingly creative player either averaging 2-3 assists a season with his best output of five goals and 9 assists coming in the COVID-hit campaign where Forest fluffed a play-off place on the final day.

However, given that his best season did come in the year Forest finished 7th and with Boro hoping to be one of the top sides in the division, Neil Warnock will be hoping a positive environment and talented teammates will push him to replicate that form. Warnock is the King of fixing broken toys.

There’s also the fact that, sometimes, it’s just nice to have someone exciting in the team.

Yes, I’m definitely going to say my Grandad is better than him after Ameobi has given the ball away for the fifth time in a row but after 16 months of not being in the stadium, I don’t just want to see 11 perfectly functional bores kick it round for 90 minutes.

After spending 16 months on the sofa. I want someone to get me out of my seat.

As well, it’s hard to judge his signing as a whole until the end of the window. It’s like commenting on an unfinished jigsaw. I’d feel a lot more positively if he’s a squad depth piece rather than someone who is in line to start 40 games next season.

The same can be said of the first of today’s double signings, Uche Ikpeazu.

The striker has signed from Wycombe for a reported fee of £750k that could rise to as much as £1 million with add-ons.

Before we go in-depth, here’s the real expert analysis. Uche Ikpeazu is fucking massive. He’s 6ft 3 and the proverbial brick shithouse. Opposition defenders coming to the Riverside will need to be getting on the protein powder during preseason while he’s also quicker than his sizeable frame would suggest.

It’s clear why Neil Warnock would fancy him and if we’ve signed the version of Ikpeazu who bullied Boro home and away last season he could be a steal.

The primary goal for the recruitment team this summer is to sign multiple forwards who truly fit the Warnock mould and for Warnock to not sign off on strikers for the sake of filling a place. There’s no way any of us can watch poor Akpom and Watmore playing piggy in the middle as our midfield and the opposition defence trade hoofballs. 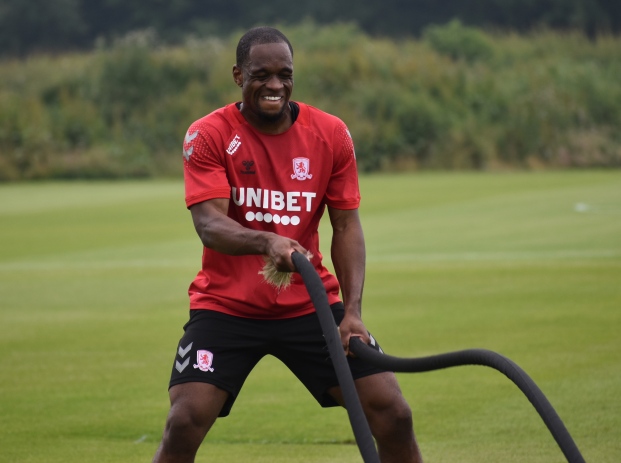 Ikpeazu brought those qualities in the second half of the season for Wycombe and was the focal point for the Chairboys heart-warming attempt at survival. Wycombe, running on a lower-half of League One budget, didn’t get a point until their 8th game, yet only finished a point behind 20th placed Derby at the end.

Ikpeazu struggled for form and fitness in the first half of the campaign as Wanderers got to grips with life in the Championship, only playing in 4 of the first 18 games so it shouldn’t of been any surprise that his first goal of the season came against Typical Boro. In fact all of Ikpeazu’s 6 goals and 4 assists came in the second half of the season, which helped to spark Wycombe’s survival bid.

In terms of fitting the bill for a Warnock side, Ikpeazu certainly looks the part more than the other options previously at the managers disposal. The former Hearts man won 109 aerial duels last season compared to Britt Assombalonga’s 48 and Chuba Akpom’s 92, although that’s a long way off top target Michael Smith who won 308.

He was also more likely to lay off to an oncoming teammate for a shot than Akpom and Assombalonga last season with 0.5 key passes to their 0.2. He showed that ability to hold it and roll a defender when he battered Grant Hall on the final day prior to slipping it to Garath McCleary.

Crucially, he outscored both Assombalonga and Akpom and would have ranked as Boro’s joint second top scorer with George Saville.

However there is a slight worry, as silly as it sounds, that we’re a little bit too keen to sign players who play well against us. First Joe Lumley, who dazzled when replacing Seny Dieng at the Riverside but was definitely QPR’s number 2 and now Ikpeazu who hasn’t set the world alight.

There was plenty of crying laughing emojis from Hearts fans when the news of his transfer was broken by Sky Sports Keith after a poor time north of the border and the only time he has hit double figures for goals was in League 2 for Cambridge United (13).

He also has a heavy first touch and was dispossessed 2.3 times per game last year, more than Assombalonga (1.4) and Akpom (0.5), which is a bit of a red flag for a target man though some of that can be attributed to being the solo point of the attack and having less talented players around him than he will enjoy at Boro to pass to.

If Michael Smith or another more established target man type joins the club, the move for Ikpeazu immediately gets a few extra bonus points from me.

What we cannot afford this summer is to go into the season light up front. If we’re dedicated to playing in a direct manner under Warnock, we can’t have one big fella and nobody in the same mould to bring off the bench.

Lee Peltier has also signed after leaving West Brom to offer cover in defence. Warnock mentioned today that Darnell Fisher has suffered an injury that needs to be assessed so it makes sense to bring another body in. Also, there’s always a question mark over Dijksteel’s durability and Djed Spence may be sold or loaned out.

While a younger player would’ve been preferable, you can see Warnock’s reasoning. His debut at Norwich apart, Fisher hasn’t really made an impact and at least Warnock knows and trusts Peltier from his time at Leeds and Cardiff. It should be a team-friendly contract and with the best wishes in the world, he’ll hopefully only play a handful of games.

That makes four of Warnock’s “8 or 9” that he wanted to bring in. Who else will follow Lumley, Ameobi, Ikpeazu and Peltier remains to be seen.

Pelly Ruddock has reportedly left Luton Town and the energetic centre-mid could be on the way to Teesside to replace George Saville who is heading back to Millwall. Michael Smith remains Warnock’s main fella and there’s still a glaring need out wide to fill, even with the return of Sammy Snakehips.

There’s also the small matter of Martin Payero, the Club Atlético Banfield midfielder who broke Boro Twitter this morning, with the press in Argentina saying a deal is in place for the 22 year old to move to England for $8 million after taking part in the Olympics. He looks a bit good, doesn’t he?

But let’s not get too carried away.

Oh, go on then. UP THE BASTARD TRANSFERS.