Tomorrow is going to be a good day because tomorrow we get to see Andraž Šporar play football.

The cardinal rule of loaning a player from another team is that you shouldn’t catch feelings for them. It’s a tale as old as time.

Loanee comes in, steals some hearts and then departs, their time at a club confined to moments of rose-tinted reflection and longing for the “good old day”, loves that burned bright and fast like a teenage summer romance.

But like they say, it’s better to have love and lost than never to have loved at all and Šporar is making it incredibly hard not to fall for him. Whether it’s silky touches, taking Insta snaps with his lovely dog or singing along to his own song, Šporar is wooing Teessiders with every move he makes. 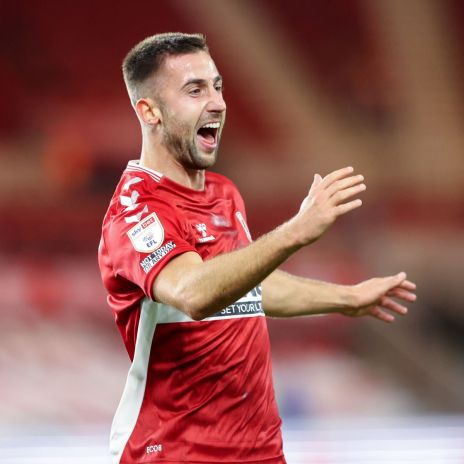 There is a slight safety net when it comes to catching feels for the Slovenian loanee with his move from Sporting Lisbon including an obligation to buy clause if Boro achieve promotion to the Premier League and the 27-year-old scores 15 goals in the process. 3 down, 12 to go.

While the chances of Boro escaping the Championship this season are debatable to say the least, Šporar has shown the quality to suggest that he could hit at least keep up his side of the bargain with the right service.

The striker, who scored 60 times across three seasons in the Slovak Super Liga, has demonstrated an ethereal ability to stretch and break past defences in a way that gives off major, major Kike vibes.

The way he pulls defenders around and blows holes in opposition sides has opened up a new route of attack for Neil Warnock’s side that was highlighted when the forward opened his account against Forest by latching onto Tavernier’s through ball and slamming it into the net.

The former Slovan Bratislava standout also showed a touch of class to direct a backheel into the path of Matt Crooks in the lead up to Paddy McNair’s strike against Sheffield United.

That quality was on further show in the international break when Malta were on the end of a certified worldie from a long pass and knockdown that every Boro fan watched 1876 times and had plenty of us hoping for a pairing with Uche Ikpeazu to try and replicate that magic.

It is with Duncan Watmore that Šporar has actually been playing alongside most often since being fully integrated into the team, although we have seen the fruits of the 1-2 punch with Ikpeazu as well, with the two smaller, more nimble strikers being called into action to press defences and create space for Boro’s wide men.

It remains to be seen how Neil Warnock utilises his forward options once the rest of his team is fit, with the current back three and two up top system currently helping pick up three wins in a row being a byproduct of the injury woes to the defence but Šporar has shown a growing understanding with both Watmore and Ikpeazu, with complimentary upsides to both options. 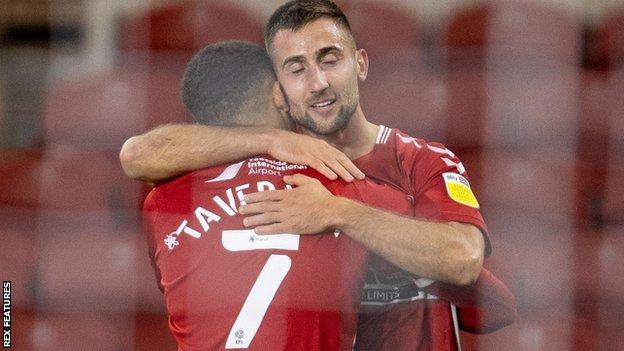 His partnership with Watmore gives Boro a pair of strikers that immediately puts the opposition on the back foot and, as shown against Barnsley and Sheffield United, can disrupt sides that are looking to pass the ball out from defence.

When playing alongside Ikpeazu against Cardiff, Šporar was able to get onto knockdowns and quietly glide into space like a Slovenian spectre, with Ikpeazu attracting the lion’s share of attention from the Bluebird’s centre-backs.

It’ll be interesting to see how those two combinations work against stronger sides and which proves the superior duo as the season rolls on, but what is important is that Šporar is partnered with someone. His greatest assets are his movement and ability to play on the shoulder of the last defender. 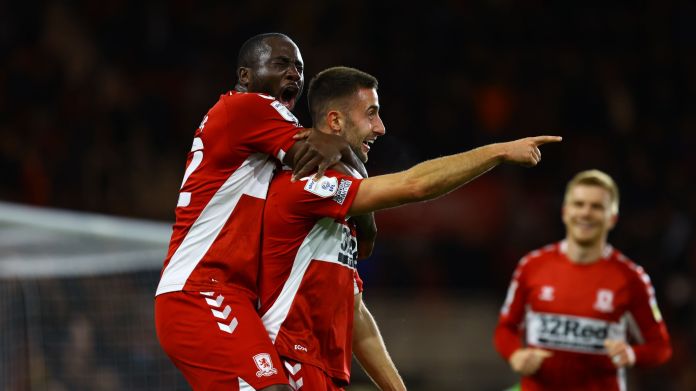 While Boro have shown an increased desire to get the ball on the deck against Peterborough, Barnsley and Cardiff, unless Neil Warnock is secretly turning the boys in red into 1974 Holland, having Andraž as the sole spearhead of the attack will nullify his biggest strengths as his focus would inevitably shift to holding the ball up and bringing others into play.

That’s not what Andraž is here for. He isn’t here for the ugly side of the game. Look at him.There’s nothing ugly about him.

No, what Andraž is here to move like no Boro striker has in years. He’s here to breathe life back into the Handsome Reds bandwagon that lay dormant for a couple of seasons, with his sharp haircut and ABSolutely quality holiday pics.

He’s here to score goals (at least 15 hopefully) and send Boro fans wild, wild, wild on the way to promotion.

It may seem pretty pie in the sky but if Neil Warnock consistently gives the loanee from Lisbon the support of a strike partner and doesn’t weigh him down with the responsibility of being a makeshift targetman, there’s no reason that Šporar can’t hit that 15 goal mark.

Paddy McNair being sound and letting him take penalties as he did against Cardiff will help as well and it can’t just be me constantly daydreaming about him running onto endless through balls from Tav and Payero either, right?

Then, who knows? 6 of the 9 players who scored 15+ in the Championship last season played for teams that finished in the top 6. It’d certainly put us in the mix and maybe this time, falling in love with a loan player wouldn’t end in tears.

So come on Andraž Šporar, score some goals for Boro and let’s make this love last forever.