Born on the 6th of June 1884 in North Ormesby, Reginald Garnet “Tim” Williamson would never have imagined that over 137 years later his name would still be spoken by fans of his local football team after amassing a club record 602 appearances across 21 years of service.

The WIlliamson family would move to Coatham in Redcar during Tim’s early years as his father John was a blast furnace manager. Tim had three older siblings – Cecil, Louisa Hilda and Harriet – and his mother’s parents William and Martha also lived in the families home.

Williamson started out playing football for Coatham Grammar School where he would often turn out as a centre forward and he played locally for Redcar Juniors and Redcar Crusaders. Despite only ever reaching a height of 5ft 10″, which earned him the nickname “Tiny”, Williamson would turn his hand to goalkeeping in his teenage years.

He was 17-years-old in 1901 when scouts from Middlesbrough F.C, who had just recently been elected to join the Football League, spotted him playing for Redcar and invited him to take part in a friendly against Cliftonville.

Boro were so impressed with Williamson’s performance in that game that he was offered a professional contract, which he accepted under the condition that he would still be allowed to continue his career as a draughtsmen. 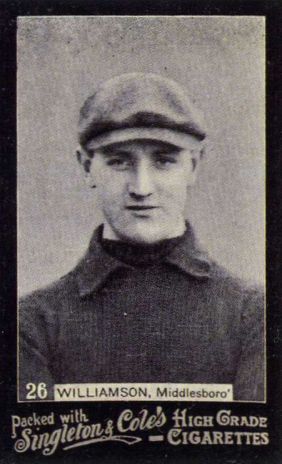 This commitment to work, at a time when footballers could only dream of being paid the type of money that would explode into the game later in the century, meant that Williamson would eventually miss out on Boro’s first ever European Tour to Denmark in 1907.

Williamson’s first appearance for the club would come in the Northern Football Alliance in a game against Crook Town on New Year’s Day 1902 and a league debut would follow that on 19 April 1902 against Bristol City.

Signed as an understudy to Martin Frail who kept goal during the record breaking 1901-02 season that saw Middlesbrough concede just 24 goals on their way to promotion from Division Two (a record that still stands today) and then Scottish international Rab McFarlane, “Tiny” would eventually secure his spot as first choice ‘keeper in the 1903-04 season and would remain so until retiring in 1923.

Tim was the last man to guard the Middlesbrough net at the old Linthorpe Road ground in 1903 and would have the honour of being the first home custodian of the Ayresome Park goals as the Boro opened their new ground in the 1903-04 season. 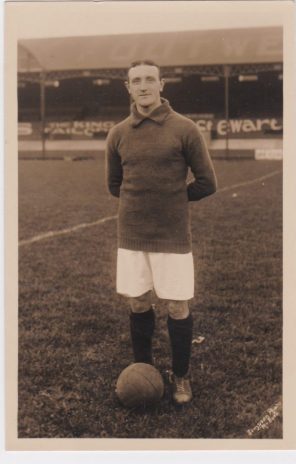 Described as “one of the best goalkeepers in the country”, Williamson brought an air of calm to the newly opened Ayresome Park, as he could often be seen standing with his hands on his hips while Middlesbrough attacked the opposition’s goal. Wearing an oversized jersey, the goalkeeper was said to have never lost his cool in front of supporters and that cool-headed approach would translate into the way he would play the game.

At a time when goalkeeping and football in general was quite basic, Williamson would forego the traditional techniques expected of a goalkeeper. Rather than going down to one knee to collect a loose ball, he would flick it up with his foot and catch it and would regularly sidestep oncoming forwards to knock the ball over their heads and into his arms. In an act that must’ve been revolutionary at the time, Williamson would bring the ball out his area into defence to start play instead of kicking it up field.

Further breaking from tradition, the legendary stopper also scored two penalties for Boro but after missing one against West Ham he decided it too tiring and too much of a risk to run the length of the pitch, so declined to take any more.

A performance against Everton in 1910 was noted as “one of the finest exhibitions of guardianship ever witnessed at Goodison Park” while the Athletic News proclaimed “Williamson, thy name stands for consistency and cleverness”.

It was these types of performances that helped to fuel the fire of the upstart team from the steel-making powerhouse as Middlesbrough cemented their place in the First Division during the pre-war period, as well as the goals of Alf Common, Steve Bloomer, George Elliott and Walter Tinsley.

Williamson’s exploits also caught the attention of the England national team and he became Middlesbrough’s first goalkeeper to appear for England when he made his debut in 1905 as a 20-year-old in a game against Ireland, in the first international game to be held at Ayresome Park.

The Boro ‘keeper scored an own goal in that game and would have to wait six years for his next cap, as the form of Liverpool and Aston Villa’s Sam Hardy and the selection process, more similar to how cricket sides are chosen, kept him out of the team.

He would go on to earn 7 England caps, all in British Home Championship games, with his final appearance coming against Ireland in February 1913.

In the 1913/14 season, Williamson kept goal for arguably Middlesbrough’s best side, as Thomas H. McIntosh’s side finished third in the First Division just a point behind second placed Aston Villa and eight points behind champions Blackburn Rovers.

With George Elliott, who stands as Boro’s second highest scorer with 213 goals leading the line and Williamson in goal, McIntosh’s side were widely regarded as future champions in waiting. 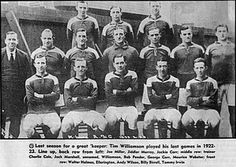 However, the following season saw Middlesbrough fall to 12th in the table and the start of the First World War saw all professional football suspended. Most players were called up for service and Ayresome Park was closed to be used as an army training centre. Williamson, now 29, was exempt from being called up to fight due to his reserved occupation and continued to play football for Boro in the amateur Northern Victory League which the side won.

When football restarted following the war, Williamson returned to guarding the goals at Ayresome Park until his final appearance on 24 March 1923 in a 1-0 defeat to Cardiff City. At 38 years and nine months old, Williamson would hold the record for being the oldest player to represent Middlesbrough until player-manager Bryan Robson appeared for the club 74 years later in 1997 against Arsenal.

Despite playing 602 times for the club, The Football League initially refused to sanction a benefit game for Williamson on the grounds that his years playing during the war didn’t count, but they eventually recanted and a game was held against Chelsea. 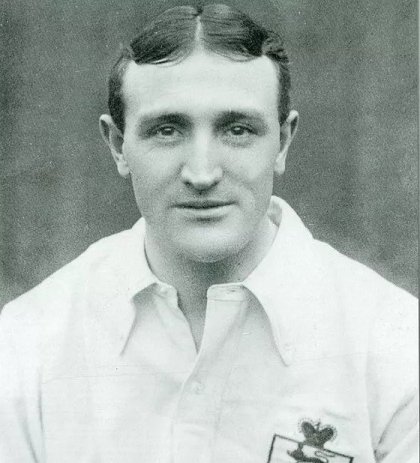 Upon his retirement, Williamson was paid £1000 and given a silver tea and coffee service from MFC chairman Phillip Bach and he continued to play in goal for his works football team although Williamson was rarely seen in attendance at Ayresome Park instead choosing to spend his free time playing golf and shooting.

Tim Williamson died in North Ormesby Hospital on 1 August 1943 at age 59 and is buried in Coatham Churchyard.

There can be no doubt, after 602 appearances over 21 years, that Tim Williamson helped to put Middlesbrough Football Club on the map. A true legend in every sense of the word.